We have seen some great news in this general space since I posted this article. HP Support Assistant still sucks, though.

First is that Dell recently made its support software Dell SupportAssist a Microsoft Store app. Lenovo Companion, and now Lenovo Vantage, has been in the Microsoft Store for a while now. This is great news because these OEM support software is updated regularly just as any other software, to fix bugs, add new features, etc. While it’s possible for classic Windows applications to be able to update themselves, having them in the Microsoft Store makes a more unified experience. Moreover, even those classic Windows applications that do support automatic updates often requires user interaction to either initiate the update or go through the installation wizard. That is not the case for Microsoft Store updates. Microsoft Store by default update apps automatically. It just happens quietly in the background without the user even knowing it. Just like how iOS updates its apps on iPhones and iPads.

The process (wsappx) can be very resource intensive at times. On a dual-core device (e.g. most thin and light laptops from 2017 and earlier) it is not unusual to see wsappx to consume all CPU resources. But that’s another story.

The second development is that Intel has released its first Universal Windows Driver (UWD) compliant drivers. I’ll just quote Thurrott on why this is significant:

HP Support Assistant (HPSA) is a built-in software that comes with consumer HP desktop and laptop computers. It is intended to be an all-in-one solution for checking warranty information, troubleshooting, and, most importantly in my opinion, software and driver updates. Dell SupportAssist and Lenovo Vantage are two similar tools and both perform reasonably well. HPSA, however, is nothing short of agony. The software is simply too dumb to be useful. Here is why.

Not a hands-free experience

HPSA will launch a separate window for certain updates and the user must follow the on-screen prompts to proceed with the installation. That means the user has to  constant engage with the computer, often for dumb things e.g. clicking Next. In contrast, updates in macOS through the App Store requires little user interaction if at all. Pretty much the whole process is automatic. I wish updates on Windows computers are built the same way. Microsoft should provide a common framework under which system integrators can deliver device-specific updates.

HPSA doesn’t know if installation is finished or not

For those updates that launches a separate installer, the installer does not communicate back to HPSA when installation is finished (and let HPSA go on with the next update, for example). To solve this, HPSA wants your human help:

Failure to install updates; unclear why

Sometimes the installation would just fail and give no indication as to why. “try again later” doesn’t help, either. 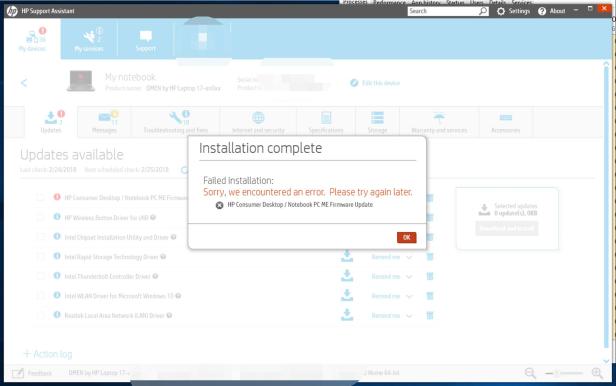 Sometimes an update installation would register a failure even though everything goes smoothly. On an HP Slimline desktop, I manually downloaded and installed F.24 BIOS update from HP support website. Everything went smoothly. However, after “Check for updates and messages” HPSA is still telling me I need the F.24 BIOS update.

Then I tried to reinstall the BIOS update within HPSA software. Again, everything went smoothly and no error messages showed up whatsoever. And the process looked no different from when I used the installer I manually downloaded from HP Support website. After the laptop rebooted, I logged into Windows and let HPSA check for updates again and sure enough, the BIOS update was still there.

HPSA keeps an “Action Log” that records past installations. It also claims that the last installation failed, even though, again, nothing during the installation process indicated anything abnormal and System Information clearly says I have the F.24 BIOS.

Failure to find the most current BIOS/UEFI update

On an HP Envy 13 laptop, the current UEFI firmware/BIOS version is F.13. The latest BIOS is F.22 according to HP Support website. However, HPSA only finds an F.18 update, not the most current version F.22.

But sometimes HPSA cannot find an existing update at all.

On an HP Envy 13 laptop, the internal Intel SSD is running firmware HP01 while the HP Support website has released HP03 firmware update. However, this update would not even show up in HPSA.

Manual installation didn’t work, either. I downloaded the update file from HP Support website and tried to install it standalone. However, the update process command window popped up only briefly and immediately terminated itself before I could see anything in the command window. I had to run it in PowerShell as administrator to see what happened:

Sometimes, an update would “disappear” during installation. In one instance, I was installing F.22 UEFI firmware update, when HPSA inexplicably notified me that the very firmware I was installing was no longer applicable. The laptop was running an older version of the firmware.

Sometimes an update won’t go away in HPSA even after installation. This is a frequent problem with Intel chipset driver. As you can see in the Action Log, the chipset update is “Installed on: 2/24/18”. Yet it persists under available updates.

On a Slimline 270 desktop, HPSA finds two updates of the same nature, just different verisons. The desktop is running Windows 10 1709 with all latest Windows Update installed. Yet HPSA wants to install an update that is clearly intended for Windows 10 1607.

Why do I care?

Maintenance and support has always been a major reason consumers would choose a pre-built computer from a major system integrator over a custom-built system. To keep a custom-built computer up to date on all driver and firmware updates, one has to follow multiple vendors’ support pages, e.g. motherboard, video card, network adapters, etc. Motherboard manufacturers in general don’t do a good job of frequently updating driver software except for the higher-end models. Most of their driver update software suck, too. This is potentially where HP shines, but the current version of HPSA has come up short. HPSA is not the worst support software I have used – Acer Care Center would not find me a single update when I know for a fact there are many available – but HP should be held to higher standards, shouldn’t it?

The macOS updates are handled much more elegantly. Even Lenovo Vantage (previously Lenovo Companion/System Update), which is the best support software in the Windows world in my opinion, does not match Macs when it comes to the experience in keeping my computer up to date. Why? Because a system integrator’s software is by definition a separate program from Windows Update, whereas the App Store in macOS handles everything from system updates to driver updates. A true all-in-one solution.

I assume Microsoft Surface devices are much better in this regard. If you can find a Surface device that fits your needs (in terms of performance levels, form factor, input devices, etc.), then I will argue it’s going to offer better user experience than HP/Dell/Lenovo/ASUS/Acer as far as maintenance and support goes, simply because of the higher level of integration of software and hardware. “It just works” is easier to achieve when the manufacturer controls both software and hardware, and is thus difficult to pull off with the traditional Windows ecosystem where HP and the likes pick hardware and Microsoft provides an operating system.

I am curious to see where Microsoft goes with the Surface line. Windows is great because of its high penetration, and having many hardware partners definitely help with maintaining that market share. But to truly manage user experience, Microsoft has to take everything into its own hands, and it must do so without annoying Dell, HP or Lenovo. A longer Surface line, especially one with more affordable models, seems like the very thing that would annoy Dell, HP and Lenovo.

But I wish to be proven wrong. I wish Microsoft and its partners find a way to carve out a market segment for affordable Surface devices. Or, alternatively, find a way to deliver driver and firmware updates through Windows Update for all Windows computers. I have already seen such delivery recently on a Dell Inspiron laptop where a Dell BIOS update is pushed over Windows Update, but the experience was quite buggy and needed improvements. I hope this method gets more polished over time and, more importantly, sees wider adoption in the future.