The Lenovo TS140 is an affordable entry-level server that has received many favorable user reviews on various websites. Albeit a server in nature, the TS140 is often used as a generic desktop replacement (with some enterprise-class durability, hopefully). Most (there are many different configurations) TS140’s come without dedicated graphics, so one question that is often asked is what kind of video card can be used with the TS140.

The motherboard supports PCIe x16 and the case certainly has plenty of room for a decent video card. The real limiting factor seems to be the power supply unit (PSU). The PSU is a 80 Plus Bronze model rated at 280 Watts. My particular sample is manufactured by AcBel. Only two cables are provided: a 4-pin CPU connector and an 14-pin motherboard connector. There is no PCIe 6-pin auxiliary power connector.

As of May 2015, your safe bet (and easiest solution) would be a GTX 750 Ti, which is also my personal choice. Indeed, NVIDIA positioned the GTX 750 Ti as an OEM upgrade card. Many basic OEM PCs, TS140 included, have a ~300W PSU with no PCIe auxiliary power, which limits the power draw of the video card to 75W. At sub-75W the GTX 750 Ti is really the card to get for its incredible efficiency.

But the 280W PSU in TS140 should be able to handle much more than that. With the GTX 750 Ti I never see the system draw more than 120W, so there is still plenty of room to operate.

The lack of 6-pin or 8-pin PCIe auxiliary power connectors is not a concern because you can turn SATA power into PCIe. The PSU provides six SATA power connectors. The one ODD and one SSD consume two of those so you are still left with four, which can be easily turned into two 6-pin PCIe connectors with the right adapter cables. 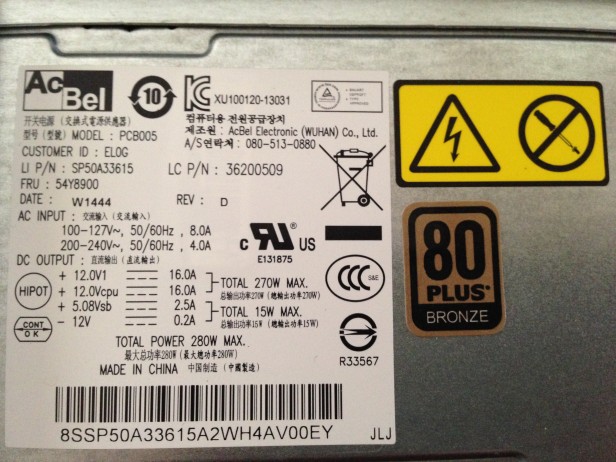